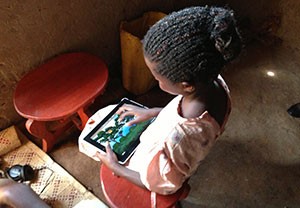 Brain Powered Games Africa is a growing collection of digital games developed in the Games for Entertainment and Learning (GEL) Lab at Michigan State University. Each game focuses on exercising one or more cognitive abilities, including attention, memory, language, visual/spatial functions, and executive functions.

Working with MSU neurologists and psychiatrists, a version of Brain Powered Games has been customized for the African context. After piloted and early version of the game as a Computerized cognitive rehabilitation therapy (CCRT) in Malawi with children with cerebral malaria, a new version of the cognitive games were built and tested in Uganda with HIV inflected children. The game was created for the iPad, Windows, and Mac.

The game has been shown to provide a valuable tool to address both Malaria and HIV-associated neurocognitive deficits in adolescences in sub-Saharan Africa. We are actively exploring additional funding avenues to continue this work.