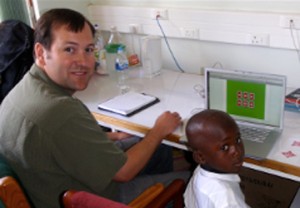 The summer of 2009, Media and Info faculty member Brian Winn spent several weeks in Malawi, Africa with a MSU team of medical doctors and psychiatrists doing research on using game technology to assist with the rehabilitation of children with cerebral malaria. The goal was to see if cognitive games are a viable method to aid in the rehabilitation of young patients (age 4 to 12) who suffered cognitive repercussions resulting from malaria. The former malaria patients were returning to Queen Elizabeth Central Hospital (QECH) for their 1 year check-up. Using a suite of cognitive games that was originally intended to be marketed to baby boomers in the United States, Professor Winn tested the children’s overall reception of this method of rehabilitation.

The study ended up being a complete success. After only a few minor modifications the kids were able to understand the game concepts. What was even more surprising was despite the fact most of the kids had never used a computer or game system in their lives, they were quickly able to learn and adapt.

Due to the success of the trial run, Professor Winn intends to return to Malawi and continue his cognitive game research. He hopes that eventually cognitive games can be part of a formal rehabilitation program for malaria patients. He also plans to help in setting up locations that would give the children easier access to the cognitive games, as many of the children live in villages with no power or internet access.

More Background on MSU in Malawi:

MSU has been studying malaria in Malawi since 1986, and until recently most of the efforts have been through the College of Osteopathic Medicine. Complicated malaria cases in the region are transferred to the Queen Elizabeth Central Hospital(QECH) in Blantyre. As a result this is where the majority of MSU’s malaria research has taken place.

More on the cognitive effects of Malaria in Africa:

Of the 500 million clinical episodes of malaria occurring globally each year, over 70% occur in Africa. Ten percent of these infections will become complicated by severe malaria anemia (SMA) or cerebral malaria (CM), killing an estimated 1 million children ages 5 years or younger annually in sub-Saharan Africa. Those who survive often experience substantial rates of neurologic morbidity. This can eventually lead to many more serious conditions including cognitive impairment, epilepsy, and comas. Cerebral malaria can have a very profound effect on the mental capacity of its victims. Children ages 4-12 can have their mental capacity reduced to that of a 3 month old child as a result of the disease.