Olympus is a fantasy role-playing game that allows players to immerse themselves in the wondrous time of Ancient Greek history and myth. Players can rise through the ranks of the citizenry, honing their skills by competing in athletic events; then put those skills to the test as they face challenges from the gods.

Olympus enhances the typical role-playing experience by getting the player off the couch. Through the use of a unique combination of input devices, the virtual actions of your avatar in the game world are driven by the players corresponding physical actions in the real world. Players succeed in Olympus only through perseverance, sweat, and calories burned!

Unlike other exergames that are about exercise, Olympus is about the experience of playing the game. To play the game, the player must be physically active. James Gee describes “stealth learning” as “when the learners are so caught up in their goals that they don’t realize they are learning.” Olympus is about “stealth exercise”. The player is so engaged in the experience of the game, they do not realize they are burning calories and getting an effective workout.

The game is being developed as part of a research project currently in progress in the Games for Entertainment and Learning Lab at Michigan State University and partially funded by the Robert Wood Johnson Foundation through the Health Games Research initiative. The research is led by MSU Professors Wei Peng, Brian Winn, and Karin Pfeiffer.

The unique contribution of the study includes five parts:

The Olympus game has been exhibited, presented about, and is the subject of scholarly research publications. 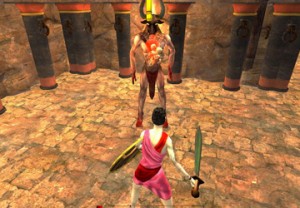