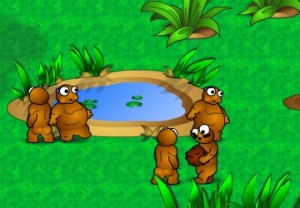 Mudcraft explored how to design a real-time strategy (RTS) game for a casual game playing audience. This was a unique and ambitious goal because it attempted to (1) modify the RTS genre to be appealing to casual game players and (2) expose and attract casual gamers to this new genre of games.  To achieve this goal the design team employed an iterative design process that combined upfront secondary research, creative design and development, rapid prototyping, and formal and informal playtesting.

The resulting game differs from traditional real-time strategy games in the following ways:

After the successful development and testing of Mudcraft we have shown that it is entirely possible to create a real-time strategy game for the casual audience. Furthermore, by taking into consideration the disposition of the audience and looking at the design of popular casual games, as well as the compelling features of current RTS games, it is possible to design a casual RTS game that is appealing to a wider audience than the current, male-dominated audience of RTS games. The project also illustrates that the Internet is a viable delivery medium for robust, independent games that explore new aspects of current game genres. This opens the door not only for more web-based real-time strategy games, but games from other genres that are also underrepresented on the Internet.